TRAVELLING THROUGH EUROPE BY TRAIN

I do not even want to get into exactly how long ago this was, but back in the last century some time when I was in high school, my friends and I always travelled all over Europe by train during the summer holidays. Literally all over. As far as the Interrail passes were valid, anyway. Decreasing prices for plane tickets as well as perhaps increasing indolence may make such long train travels seem rather anachronistic to students today. At least until climate shame appeared. True enough, I have spent very many hours in trains during my youth, but sometimes it was just as interesting getting somewhere as actually being there.

Some of these travels I wouldn’t have liked to be without. Such as going by train all the way through Italy one summer and experiencing the huge differences in the behaviour of the people we shared compartments with. In the north of the country they did not seem very different from people we would meet in Scandinavia. Nice, but slightly reserved. South of Rome people seemed to talk a lot more to the other passengers, and we all shared whatever food and drink we had brought. South of Naples was when all the fun began. Our compartment was meant for six people, but with a little goodwill and effort you could fit in eight people, which we did when the train got very crowded. The corridor was extremely crowded as well, so it was easier for people to push their luggage in through the windows than carrying it with them to their seat. Consequently, we assisted in getting bags of all sizes, a couple of folding push chairs and at one point a homemade cage with a live chicken in through the windows. All in all quite an eventful trip to Sicily. Very hot and very smelly, but we had fun.

I can’t think of train travels in Europe without thinking of a trip back from the former Yugoslavia once. In the same compartment as my friend and I were two young men, who were extremely tanned and all they were wearing were shorts. One of them also had an Indiana Jones type of hat and they were carrying their wallets pushed down behind the waistband of their shorts. We could hear they were Finnish but could not understand anything they said to each other. We tried to steer clear of these two young men, whom we simply considered ‘too much’! We basically ignored them. 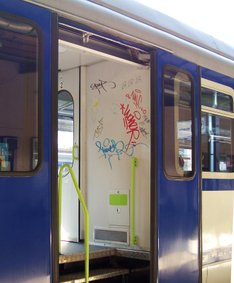 After many hours in that train, and the weather not being that hot anymore, these two half naked men seemed more and more out of place, somehow. Long story, but we were well into Germany before we tried speaking Swedish with them. It turned out that they had been camping, one morning they had gone to get breakfast and when they got back their tent was gone. In it had been their backpacks and everything else they had brought with them. They only had the shorts they were wearing and their wallets. Since they had money, and a valid Interrail pass, they had decided to travel back home and pack again so they could continue travelling. They just caught a train with no time to spare, and there had been nowhere they could buy some clothes, yet.

We had been prejudiced and convinced that these two men were parading around showing off their bodies as if they were god’s gift to women. And they had really had all their clothes stolen. Another lesson learned for me. Don’t judge. And maybe a lesson for the two men as well: if you need help – ask for it! So, Juha and Pekka from Jyväskylä in Finland, I wish I would have known about your situation earlier, and we would have lent you some clean T-shirts long before we actually did!