A few years ago, an American friend of mine stayed with me in Copenhagen for a few days after having spent two weeks travelling in Sweden. He thought almost everything was the same in Denmark and Sweden. I do feel a strong bond with the other Scandinavian countries. I grew up feeling much more of a Scandinavian than a European, although logically one does not rule out the other. It only takes 30 minutes to get from my home to Malmö, which happens to be in Sweden but which is also the closest city to here, and I go there quite often. I like being there. I like spending time with my friends and family elsewhere in Sweden, as well. My answer to a very hypothetical question some years ago, if I thought I might be able to live anywhere else than Denmark, was Stockholm. It came out of my mouth very spontaneously. But I don’t agree that 'everything' is the same as here, which is what I told my American friend. This brought about the inevitable question, 'So, what differences can you think of?'

Put on the spot, right then and there, only one thing popped up in my mind. Oddly enough, the first thing I could think of was that most front doors in Sweden open outwards, whereas they open inwards in Denmark. Admittedly, a strange detail to think of first! I used to teach paramedics and firefighters and know that both countries have their opposite standards due to fire safety: the Swedes want to open their doors outwardly so presumably it’s easier to escape quickly, and the Danes want theirs to open inwardly because presumably it’s easier for rescuers to break open (=’kick in’) a door that is hinged that way. Speculation. But the fact is, even though I know very well it’s like this, I often find myself in auto-mode and forgetting about it, as I am standing outside a friend’s front door in Sweden. Sometimes I just stand that tiny bit too close to the door, so that when it’s opened – out towards me – I have to make a quick move backwards in order not to get the door slammed in my face. A few narrow escapes, but no casualties or broken wine bottles so far.

As I desperately scanned my brains for something even remotely intelligent to tell my American friend, I thought perhaps he was right in a way. There are far more similarities than differences when it comes to history, culture, national character, customs, humour, equal opportunities, social order, politics, etc. But then there are the huge differences, in no particular order: The Swedes have stunning nature and wildlife, our largest mammal is the badger (although a small number of wolves now live in Jutland). A lot of loan words from other languages are translated into Swedish, whereas the Danes tend to integrate them unchanged. E.g. technical terms such as computer, printer and firewall are unchanged in Danish, whereas they are dator, skrivare and brandvägg in Swedish (and I like that!) The Swedes excel and we suck at winter sports (they have mountains, ice and snow, we have molehills and slush). I don’t know what those hats are for at the crayfish dinners, I don’t particularly enjoy Kalles kaviar and I’ll never learn to eat 'surströmming' or understand the fascination for snuff. 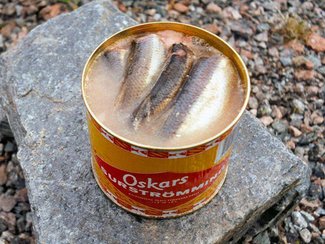 But maybe the former president of Iceland, Vigdís Finbogadóttir still hit the nail on the head, as she stated that whenever she had been to a meeting in Russia and got back to Helsinki, or had been on holiday in southern Europe and had a stopover in Copenhagen, she felt she was already home.

Surströmming, fermented Baltic herring. If you have ever smelled this stuff, you'll understand why this picture was taken outdoors!