The year before the final collapse of the Soviet Union I was invited to stay with a good friend and his family in Petrozavodsk, Russian Karelia. A friend of mine, Torben, a Danish doctor, had visited some colleagues in the USSR the previous year and gave me some good advice about the travel.

There was so much extra paper work because I was going to stay with a family and not at an Intourist hotel, and Torben had also prepared me for the very thorough security check I would have to go through in customs. Everything was unpacked, opened and scrutinized. Down to removing the cap of my toothpaste and examining the contents. My Russian friend had arranged that I could visit a school during my stay, and I had asked the teachers I was to meet if there were any teaching materials from Denmark they would like to see, and they had asked for three things: maths books for the first grade, beginners books for learning English and material for sex education. I tried to find the most ‘sober’ looking book I possibly could regarding the last subject. But I still anticipated problems at the customs because of this. On the other hand, Torben had managed to get through customs with 150 packets of ten with condoms for the hospital his colleague and friend worked at by insisting they were for personal use. 'How long are you planning to stay?' 'Two weeks!' How I would have loved to be a fly on the wall during that conversation. But no, when seeing the book on sex education, the customs officer froze for a second and then picked up the book. I’ll swear he looked through every single page of the book before he called over another customs officer who also ‘inspected’ the book thoroughly. Both officers went over to a secluded area and passed the book around to 3 or 4 other colleagues, and they took their time looking though the book, while taking turns keeping an eye on this ‘pervert’ who was trying to smuggle it into the USSR. I managed to keep a straight face through the whole procedure. Finally, they decided to classify it as ‘pornography’ and confiscated it. They put it in a sealed envelope along with a Danish crossword puzzle they had also confiscated from me. They told me in no uncertain terms that this material was strictly illegal but they would let me off with a warning, this time. I could pick up the envelope when I left the country again.

I finally met my friend in the arrival hall, and I guess he had started to worry as hours had passed after my flight had arrived. During the next week and a half I would meet a lot of wonderful people in St. Petersburg (back then, it was of course still Leningrad) and Petrozavodsk and experience a lot of interesting things. I had noticed that when my Russian friend introduced me to his friends and acquaintances he said my name, and then said something else, which made people look at me with a rather wry smile. My Russian vocabulary is less than 20 words, so I had no idea what he was saying, but after this had happened a couple of times, I asked him what he was saying about me. It turned out he had said, 'This is Millie. She’s the enemy!'

Of all the places I have travelled, I have hardly met people (friends of my Russian friend) more eager to invite me home or take me out somewhere. An Armenian friend of Victor’s insisted on taking us for a full day excursion by car up into the taiga. Great! I was really looking forward to that. He did warn me that his car was small, and old, but that didn’t matter to me. The next morning, as we were waiting outside the house, we heard some loud bangs – sort of like Onslow’s car in Keeping Up Appearances – and there they were! One of the side windows at the back was partly missing. Instead they had tried to cover it with corrugated cardboard and tape with limited success. It was October and freezing cold, but who wants to make a fuzz over a little ice-cold turbulence inside the car. After going a few miles, the bonnet blew up. I am sure my heart skipped at least a couple of beats. The driver simply stuck out his head through the side window, so he could see where he was going, and pulled over. He managed to tie the bonnet in a closed position with a piece of string, shrugged and mumbled, 'it happens sometimes'. To this day I am impressed that the hinges didn’t break and the whole thing blew off, not just up. Through all this the left side of my brain tried to convince the right side of my brain (which was terrified) to calm down. I would either have the time of my life, or we would end up killing ourselves, and I had absolutely no influence on which way it would go, so I might as well relax. Luckily for all of us, it was the first. The almost literally endless forest up there was extremely beautiful in the autumn. Maybe 15-20 different kinds of trees growing wild among each other and had every colour from green, through yellow, orange, red and purple to brown. I’ll never forget that day. 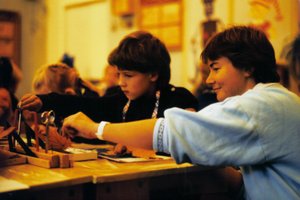 The visit to the school was interesting. I taught an English class in an 8th grade and assisted the teacher of the first grade in the art class. The pupils didn’t have to wear school uniforms anymore, but most of them still did. I wonder what my Russian colleagues thought of the change of rules I practised that day. E.g. the students were used to having to stand up when they spoke in the classroom. I explained that in Denmark you remained seated when you spoke, so that was what we were going to do during my class. Most of the students seemed to enjoy a change, but there were a few who nervously glanced in the direction of their regular teacher as if to ask, 'Is this really OK?' before they remained seated while speaking. Another thing that seemed to shock some of them was that I would sometimes address someone who had not raised his hand. They were definitely not used to that.

The first graders were great. They had collected leaves and moss outside and were making collages of their findings. The sad thing for me to see was that they were all given the exact same colours of crayons to work with and specific written instructions (hand written by the teacher): paint a sun in the upper right hand corner of your paper. Put glue on your leaf. Place it in the lower left hand corner, etc…

One of the children I was working with was Sasha (Alexandr). We exercised a little disobedience together, disregarded the instructions and stuck the leaves and moss wherever we liked on the paper. I sincerely hope I did not get him into trouble concerning the assessment of his project afterwards! Before I left he came over to me as I was packing my bag, held out his little clenched fist, released it to let his boy scout pin fall into my hand and raced out of the room before I could say or do anything. I still have the pin. I have often thought of him and hope he has a good life! 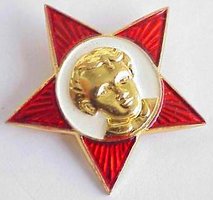 I am also a computer teacher, and they showed me their computer room. Back home at school in the late 1980s, we had PCs in several classrooms and here they Russian teachers showed me a room with a huge computer in the middle, and several monitors along the walls. The computer was the size of a medium sized refrigerator. Not without sarcasm, the teacher said, 'Soviet computers: The greatest in the world!'

Time to go home. At the airport I got back the envelope with the items they confiscated upon entry. I.e. I got a sealed envelope with my crossword puzzle. No trace of the book ... 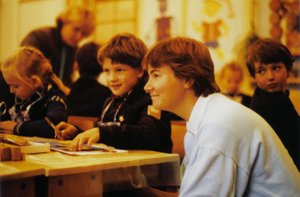