About 20 years ago a news team from German television visited the technical college I taught at back then. The background was that a law had been passed in Denmark which gave young people under the age of 25 the ‘choice’ of either losing half their social welfare benefit or enrolling in a school or college, if they wanted to keep their full pay after 2 years of unemployment. It was definitely twisting the arms of these young people, and the strong opposition to being force fed with education, which some of these young people had, led to very poor results at some schools. At my college many students had had fine results. I think mostly because we did not simply enrol them in our usual classes but had created new projects especially for this group, of which many suffered from distinct school fatigue and had had a lot of previous failures in the school system, and we also took the time to ask them what they needed and what they wanted to learn.

I happened to be teaching one of the classes in question that day and had no problem being followed around by a news team making an item for the ‘Tagesthemen’ news programme in Germany that same evening. I knew they were considering passing a similar law in Germany, and although I did not know the exact agenda of this news item, I just assumed it was part of a pro and con discussion. They needed some footage from a classroom, in the workshop, and an interview with me and a couple of students. After a while it seemed as if even the students forgot about the crew being present in class. But that changed. The cameraman came over to me, “This doesn’t really look much like a classroom, does it?” I didn’t quite understand. I thought it did. And although I was not happy about rearranging the tables so it looked more like their idea of what a ‘typical classroom’ looked like, the students seemed eager to please the crew and had already started placing the desks in a different way (maybe the layout of a classroom from, say, at least 40 years ago). I was beginning to think the whole thing was a bad idea. But they were clever - they just asked for one thing at a time. And with one of my bosses hanging around nearby and encouraging me to do what they said, it was also a little hard to put down my foot and say "no way!" With hindsight it’s easy to see I should have stopped them. I don’t like being manipulated.

After they had filmed in the classroom it was time for the interview. Although the reporter did not give me the exact questions beforehand, he did let me know what kind of things they would like to know and what topics he would like to talk to me about. That was really good, because while they were setting up the equipment it gave me time to think a bit about it and be better prepared for what I was going to say. The reporter started his introduction and then asked me the first question, and I replied. Dead silence. “Hmmm, this won’t work” he said. I began trying to figure out what I had done wrong, and he said. “Your German is much too good! Couldn’t you speak with a heavy Danish accent or something?” In my most polite and patient voice I had to say I could not. The truth is that I would not, and I was starting to get extremely annoyed with their staging. Asking a language teacher to speak a language she knew quite well in an awkward and clumsy way was challenging my professionalism, and I was too proud to do it, really. The result was that he asked me to answer in Danish. “It’ll sound more authentic”, he said. They would later have it translated and partly voiced over. It felt strange to answer in Danish and watch him nod as if to show he was listening, even though he didn’t understand a single word of what I said. 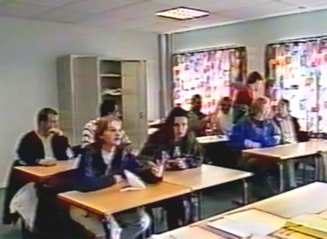 Afterwards he wanted to talk to some of the students. I thought it would be best if the rest of us waited in the canteen, so the students could say whatever they wanted without any pressure on them because their teacher, or anyone else, listened. We waited there for two entire lessons, because he ended up talking to every single student. I found out later he was trying very hard to find a student who was negative about having to attend school. But nobody wanted to say anything bad about it, which seemed to disappoint the reporter somewhat! In the clips they ended up using, there were just young people who said they were happy getting a new chance in the educational system.

I doubt any of those students had ever watched the late night news ‘Tagesthemen’ on ARD, German national television channel 1, but I bet they all did that evening, and had their VCRs on. I wasn’t at home that evening but a student gave me a copy of it. ‘Zwangsarbeit’ (forced labour) the headline said and the news reader literally had a raised finger. The technical college I worked for then was within the field of transportation and logistics, so why there was bucket and mop on screen, I am not sure. And perhaps they had been slightly carried away with symbols: The bucket and rag were in the Danish national colours and apparently the Germans needed to see the Little Mermaid on screen, too, in order to know it was a story about Denmark. But the news item itself seemed fair enough to the views we had expressed. That two-minute clip on the news was the only thing that came out of that day at school. We hadn’t had much time for any of our regular classes.

A ‘typical’ classroom situation, according to the German news team. The crew had asked us to re-arrange the desks, so they were all lined up in rows. They could not get the whole classroom into the field of vision, so they removed some of the desks and pushed the teacher’s desk forward so you can see it. The curtains are drawn to avoid backlighting and the doors of the cupboard are carefully arranged so the situation will look ‘random’. They wanted me in the frame as well, so I am there in the background, more or less stuck between a desk and two of the students, and talking to one of them. In ‘real life’, I would never stand like that. I am very aware of body language and I would never ‘tower’ over a student, looking down at him. And, by the way, that was the only clip they used with me. They used some short clips from interviews with one of my colleagues and one of my bosses, instead.

What the two girls in the front row are looking at, or whom they are talking to, remains unknown to me, as there was nobody behind the teacher’s desk!