Trying to find my way around in a foreign place means I am more aware of signs than I would normally be at home. All kinds of signs. One of my first days in Japan a no-smoking sign on the pavement caught my attention. In August 2007 a new law was effective in Denmark banning smoking in all public places (workplaces, most bars & restaurants). What struck me in Japan was the fact that many places smoking was not allowed outdoors. Being a non-smoker I have to admit it was nice to be able to wait for my train at a platform and not have cigarette smoke right in my face. Smoking was only allowed around certain 'smoking-area' sections of the platform, even though it was outside. There is a non-smoking sign on the pavement, but apparently this doesn't mean one can't bike across the zebra crossing! 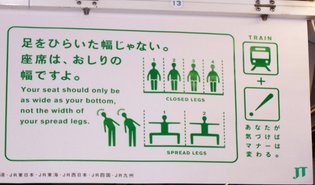 I found the Japanese people so polite and orderly that I wondered if it was really necessary to have a sign like the one telling people not to spread their legs while sitting in the train, but I liked the pictogram for man-spreading, even though I am not sure exactly what the people on the left are doing. I mean, surely standing up because other people sit with their legs spread, but I do not know what the symbol above their heads means.

Other pictures were easier to decipher. Since you rode your bike on the sidewalks in Japan, the message of this picture should be obvious. And I was, after all, in the land of cartoons. 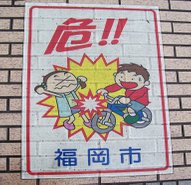 I wrote about my experience going through Tokyo by metro during rush our on another page so although an announcement on the wall of one metro station certainly caught my eye, it was not a real surprise for me. Somehow it made sense, even though it was a very unusual rule for me, to say the least. During morning rush hour there were carriages for women only. A friend explained to me that there had been cases of men taking advantages of the extreme conditions during rush hour and groping women on the train. Also cases of women falsely accusing men of feeling them up. As a consequence of this, certain carriages were now designated for women only. 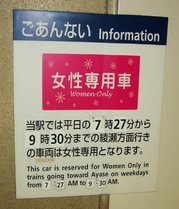 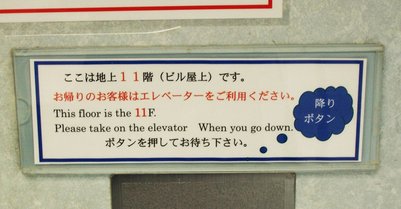 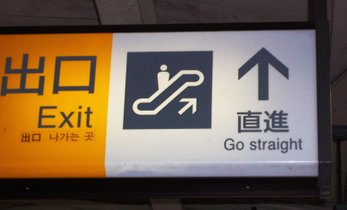 Speaking of feeling up, I never really found out exactly what it was I was supposed to do to the elevator in the Kyoto Tower while descending! 'Please take on the elevator when you go down'. Yes, being a bit of a hairsplitter and having the ability to see double-meaning and puns everywhere can be a little distracting. Such as when this exit sign caught my attention. I mean, really, I think that is a lot to ask!

How about the name 'Kinki Kanko' of a business? It seemed very catchy and easy to remember even for someone who didn’t understand one word of Japanese. (Kinki is a region and kanko means sightseeing). But I would not be surprised if some words or names in my own language may seem as funny or catchy to a foreigner, and I would be the last to see or hear it. But I do know that some of my English speaking friends find it hysterically funny that the time tables for ferries in Denmark have a 'fart plan'.

It really wasn’t that difficult to find my way around in Japan, as most signs were also written in Roman letters. However, I did go to a few smaller towns where they did not see a lot of foreigners, so sometimes I found myself waiting at a bus stop with a timetable like the one in this picture, and the only information I got was how often the busses went. Not where they were stopping or which bus I needed to catch. Not that it was a real problem. All I needed to do was stick my head into the bus and say the name of the place I wanted to go in an inquiring tone and then get a yes or no from the driver. But standing there trying to decipher the timetable did make me feel like an illiterate.

In order to find out why this map was extremely confusing for me you’ll need to open a larger version of it by clicking on it, and then close study the four corners of the world. North is down, south is up, east is to the left and west is to the right. It worked OK for me to just locate a place in the vicinity two streets away and walk there according to my memory of this map, but when I tried to combine this information with the mental “map” of the city I already had, it was an unprecedented challenge of my spatial intelligence to combine the two reversed pieces of information. Can anyone tell me, is this kind of map usual in Japan? 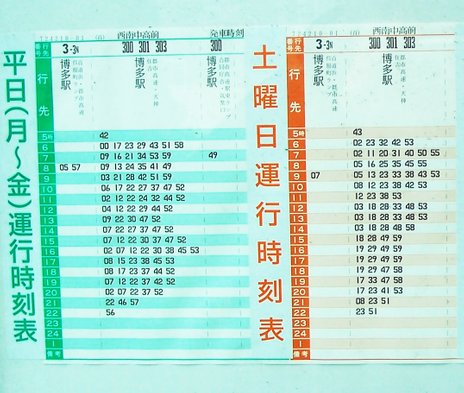 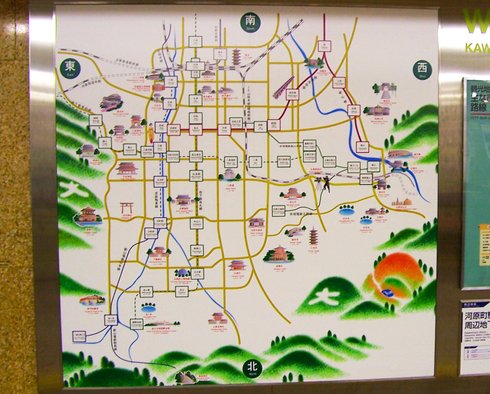 Finally, at the Hase Dera (temple) at Kamakura, I had a look at the prayers and wishes in a lot of different languages, which people had put up. I just hope Max will never lose his faith! 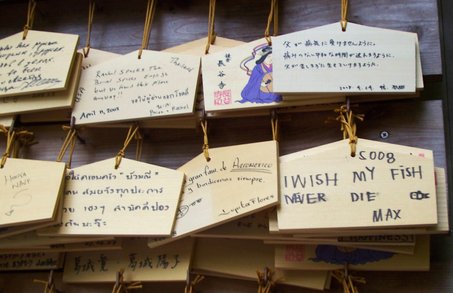