In Kyoto I arrived at a ryokan [Japanese inn] at the same time as an Australian girl, so we were shown around together. When we got to the Japanese bathroom the host made a stop, looked at us and said, 'Please, take a bath!' Unlike the Australian, who found the remark rather insulting, I understood that it really meant 'You are welcome to use the Japanese bath any time you’d like' and not that the host wanted to imply that we needed it, right then and there. Communicating can be tricky. I tend to have a rather humble approach. I never expect anyone outside Scandinavia to understand my own language and I do not expect everyone to speak English, either.

My Japanese friends are fluent in English, so we were able to discuss the meaning of life as well as the crises of the world. But I did find that most of the taxi drivers, people who work at hotels, restaurants, etc. did not speak a lot of English, and then intonation, body language, and sometimes a little 'street theatre' seemed to help. I do not speak Japanese and it is, after all, their country I’m in. Somehow their 200 words in English and my 50 in Japanese worked out fine, most of the time. But sometimes a simple thing as asking for the key to my hotel room could be a problem. The number of my hotel room in Fukuoka was 711. A big hotel, but most of the guests were Japanese businessmen or Japanese holidaymakers. They were not used to foreign guests. If I said 'sevenhundredeleven' the receptionists did not understand. I thought 'seven-eleven' would be easier, but then I was just pointed in the direction of a shop further down the street! I tried 'seven-one-one', but the result was a confused look and a '.. won-won? Won won won?' So after one day I just learnt to say 'shichi-ichi-ichi' and they understood. How hard can it be?

I did try to learn a little Japanese during my stay. After a while I was beginning to wonder if everything was repeated, I had heard 'moshi-moshi' (hello, when answering a phone), 'moto-moto' (originally), 'koi-koi' (a card game), 'shabu-shabu' (a dish), 'soka-soka' (I forgot the meaning of that one) and 'so-so-so' (yes…, I hear you). Yes, I have already begun to forget. I was using the few words I knew with great enthusiasm. Kyoto was one of my first stops, and I used the Japanese word whenever I wanted to say 'thank you'. 'Arigato', I said. But I was corrected: 'Here we say “okinni”, you know!' Another place I also wanted to tell some friends I thought our dinner was delicious, so I said 'oishii' only to be told, 'We mostly say “umai” here instead'. Somehow all this is why I like languages so much: just when you think you know something, there is more to know. You never finish learning.

One thing is trying to learn to say a few words, writing is a different thing altogether. I made the remark that I thought it would be easier for me to learn hieroglyphs than write Japanese and people laughed. I suppose they thought I was joking. Not entirely, though. When I had learnt to write my first name in katakana I must have looked as proud as a small child writing his name for the first time. In the end I could also recognize some hiragana symbols. But kanji?! The only ones I learnt were 6 very simple ones. And how many are there? 3000 or so I guess? I am grateful all the directions and all other important information I needed were also written in romaji. On this sign from a train station it is kanji at the top, hiragana below that, and finally - lucky for me - the romanization at the bottom.

Apparently there seems to be no distinction between R and L in the Japanese language. So when speaking English, play and pray sounds the same and so do liver and river, etc. I didn’t think this was a big problem, because it was easy enough to find out which word it was from the context. When I was ordering at a restaurant and the waiter suggested 'lice?' I wasn’t too surprised. However, my command of the small facial muscles that control the corners of my mouth were put to a serious test, when a man who was very active within local politics told me about the election (city council) the following day. 'I am very excited' he told me, -Tomorrow: erection. Big erection!' I swear, I kept a straight face. However, I can only remember one time when I actually misunderstood, at least for a moment. Someone had asked me where in Japan I had been, and after I had told him he said, 'Ahhh. Wrong holiday!' At least that is what I heard, but just when I was about to ask what places he thought I should have visited instead, it occurred to me that he had actually sad 'Long holiday!'

Sometimes my knowledge of English was a distraction. There was a popular brand of soft drinks called Sweat. That name may cause some English speaking people to forget they were thirsty, but I am more curious, so I bought a bottle from the vending machine. It tasted like grape fruit and was quite good. Another day, before getting into a taxi I noticed the name on the side of the vehicle 'Kinki Taxi'. Now, that may make someone rather reluctant. Maybe it’ll be better to wait for the next one? Kinki is the region, and there were a lot of taxis from that company in Kyoto. 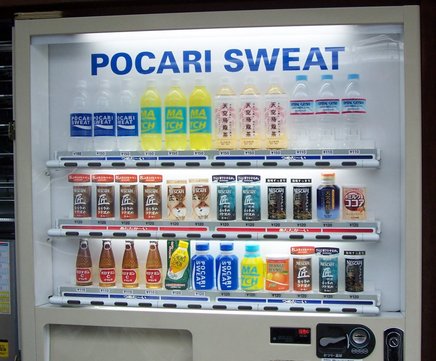 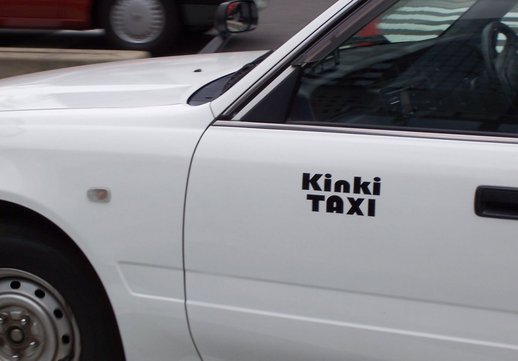