There was a Bollywood Film Festival in Copenhagen a few years ago. Although I go to the movies quite often I had never watched a Bollywood movie until then. The closest I have been was when I went to see the Danish movie Halalabad Blues which has a Bollywood inspired dance sequence. I’ll have to apologize to the couple of billion Bollywood experts out there who actually know what they are talking about for the following spontaneous impressions from the complete Bollywood novice that I am.

My friends and I bought a pass for the whole festival. The first evening we were there was a small culture shock for me. The auditorium was very much alive during the movie. There were wolf whistles, cheers and shouts to the actors and what took place on the screen. Some people had smuggled in hip flasks and were having a small party. This kind of anarchy in the auditorium reminded me of the Sunday afternoon ‘school cinema’ from my childhood. I can’t remember much about the movies we saw then, except I know that it was all a contributory factor to my great love of the movies today, but the circumstances, the whole atmosphere in the cinema and the rows we made I do remember very well. We used to stand in line outside looking as angelic as we possibly could, because the order in which they let us in depended on how calm and well-behaved we looked. But once we had passed that entrance we all stampeded through the corridors, into the hall, and took whatever short cuts we could find to the seats we wanted regardless if there was actually an aisle or if we climbed across the rows of chairs like a hurdler. During the movies, there would be children making their own sound effects to whatever took place in the movie and there would be paper planes and paper balls flying around. All that stopped when video arrived. But the lively auditoriums at the Bollywood Film Festival made me think back at these childhood Sundays with great nostalgia.

During the first Bollywood movie we watched I think I was being much too analytic. I was trying to understand. And I got caught up in technical stuff such as the fact that all the sound seemed to be dubbed afterwards – I assume by the original actors. The lip/sound synchronization was a little out of synch, and background sound/noise was extremely scarce. It made big, outdoor scenes with a couple of hundred people sound as if they were being recorded in a soundproof shoe box. And I suppose I also tried to make sense out of the extravagant music numbers. I have a great love for the 1930s and 1940s Hollywood musicals, and the musical numbers in those could either carry the plot, visualize a certain mood or the character’s thoughts and wishes, or sometimes just be pure dance apparently without any deeper meaning. In the four Bollywood movies I watched none of the musical numbers seemed to carry the plot. They seemed to be pure dance without much, if any, connection to the plot. 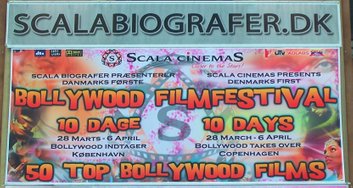 We went again the following evening and I was determined to just lean back and enjoy it and not really think too much about it. It was beginning to be fun. I didn’t even mind that towards the end something very unexpected and highly unlikely suddenly occurred and solved all the problems. Sort of a ‘deus ex machina’ effect. During the third movie I was beginning to warm up to this genre. Why take it all so seriously? The song-and-dance extravaganzas, the over the top special effects, arranged marriages, love triangles, a lot of suffering young people, really bad villains, distressed women, heroic men, a lot of courting but very few kisses, slapstick comedy and the abundant colour orgy was great escapism. It wasn’t until about halfway through the fourth movie in three days that I began to feel the symptoms of an acute overdose. But this festival was still quite an experience!